Visiting with the Misawa Airmen

Oct. 27 - During our visit to Tohoku, Ann and I visited the U.S. Air Base at Misawa. This visit was important because Aomori Prefecture plays a key role in the U.S.-Japan Security architecture. Over 5,000 U.S. military personnel work at Misawa Air Force Base. When family members are included, nearly 10,000 Americans live on or near the base. Misawa Air Base is the only combined (U.S.-Japan), joint service (Air Force, Navy and Army) installation in the western Pacific. The F-16s of the U.S. Air Force and P-3s from the U.S. Navy share the Misawa runway with the Japan Air Self Defense Force and with commercial flights serving Misawa airport. 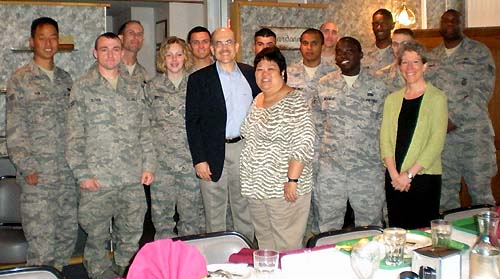 Here I am with the Misawa Airmen, Ann and Donna Welton, Consul General of the U.S. Consulate General in Sapporo.

Ann and I enjoyed the chance to eat breakfast with enlisted personnel on the base. We talked about their jobs, their impressions of Japan, and their daily lives. The enlisted personnel understand that they have an important mission to defend Japan and deter security threats in the Western Pacific. I found that they knew their role and were proud of their individual contributions to the U.S.-Japan alliance.

The enlisted men and women also appreciate every chance they get to learn more about Japan, and they participate eagerly in off-base activities, such as last winter's visit to the Sapporo Snow Festival and a more recent field trip to climb Mt. Fuji. At the time we visited, many on base were busy preparing to welcome members of the Misawa community to the base to see American and Japanese aerial demonstrations at the October 18 air show Air Fest 2009. An estimated 250,000 people attended.

However, like many young men and women who have been sent far from home, they also experience loneliness. One young woman explained to me that she appreciated her mother coming all the way to Misawa to help her with the delivery of her first child. Soon her Mom will go home and she will miss her. Another servicemember mentioned how expensive it is to visit his parents back in the United States. I appreciate the sacrifices these young airmen are making by coming so far to help strengthen our alliance.