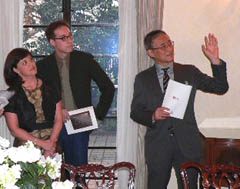 April 23 - Ann and I were delighted to attend the opening of an art exhibition at the residence of Ambassador John V. Roos and Susie Roos. Susie told me she conceived of this exhibition because she wanted to utilize the grand space of her residence to highlight the close artistic ties between our two countries, especially in this year, the 50th anniversary of our alliance. The exhibit, called "Ties Over Time: Japanese Artists and America" features the works of contemporary Japanese artists who have lived in the United States. Many of the artists came to the opening, and Ann and I enjoyed talking to them about their art and their experiences in the United States. 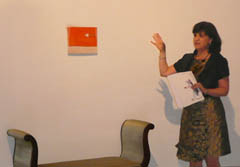 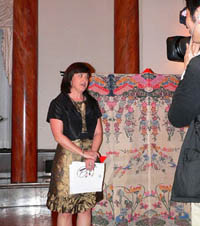 One artist said his time working and living in the United States had opened new horizons for his work. His comment made me recall how my first experience studying in a Japanese school had also opened my eyes to a new culture with different ways of thinking. Looking back on this experience, I now understand that I was rather judgmental at first about differences I did not understand. But then, as I adjusted to Japanese customs, I became more accepting of novel experiences.

The American Ambassador's residence in Tokyo is a special place that has been home to 16 U.S. Ambassadors. Many U.S. and Japanese political leaders, as well as business and cultural figures have exchanged views here since 1931 when it opened. Ann and I agreed that this home provides a marvelous setting for an exhibition of contemporary Japanese art that highlights the rich interchange of culture, people and ideas between the United States and Japan.

Here is an article on this art opening in Japanese, by Obayashi Corp. It shows a few more photos. Obayashi Corp. completed the construction of the U.S. Ambassador's residence in 1931 and renovated the building in 1995.