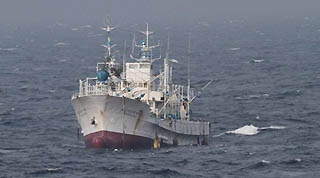 When the U.S. Navy took this photo of the Houki Maru off shore, they had no idea they would help reunite it with Shiho and her family.

April 5 - "I am a 14-year-old Japanese." An e-mail with this subject line caught the eye of U.S. Navy Lieutenant Commander Mike Morley aboard the USS Blue Ridge as he began a busy work shift in support of Operation Tomodachi last month. Opening the note, he read an appeal for help written in halting English by a Japanese schoolgirl named Shiho in Hokkaido. Her father had lost his fishing vessel in the tsunami, and she asked if the U.S. Navy could help him locate it. Morley was struck by the stoic, quiet dignity in the girl's appeal for help.

After reading and re-reading Shiho's e-mail, Morley wrote back that he would try to help her locate the vessel. She replied almost instantly that she was waiting for information with hope. Lieutenant Commander Morley knew he could not let her down. He checked with a U.S. Navy ship that had photographed her father's boat floating kilometers from its home port. Examining the photo, he was encouraged to see the ship appeared in remarkably good shape. After further research, he wrote back with the coordinates of the ship when it was last seen. 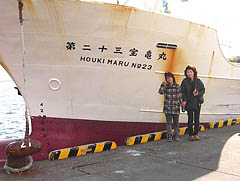 Shiho and her mother were happy to be reunited with the Houki Maru!

Shiho replied: "Thank you for your kindness. I and my family saw the photograph of the missing ship, and tears fell." A few days later she wrote again that the Japanese Coast Guard, using the coordinates provided by the U.S. Navy, had found her father's ship. Her father was going to bring his ship back with a tugboat. Shiho said she would never forget the navy officer's kindness as long as she lived.

Lieutenant Commander Morley wrote how wonderful it felt for him and his shipmates to bring some measure of relief to an affected family in the midst of such a terrible tragedy.

I feel that Japan and USA ties have got very much strong through U.S. large scale of military and private aid after the earthquake and tsunami, which is far more than the other country's aid. I feel now that USA is the most important/reliable friend for Japanese people. Therefore we Japanese should also cooperate with USA on Okinawa Futenma Issue as much as possible.

I have had resistant feeling against USA because of criminal air-raids to so many unguilty citizens of Tokyo, Hiroshima and Nagasaki in The world war second without precaution, which seems to be much more guilty than Japan's raid to U.S. military port Pearl Harbor. But I now changed my mind to forgive the said US crime and deeply appreciated U.S. friendship, which I hope to last forever.