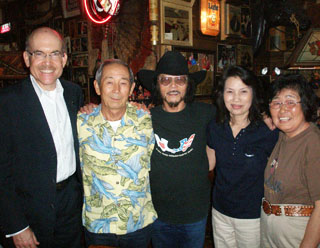 Hanging out with Charlie and his pals.

Sept. 16 - Kumamoto is famous for its ancient castle, distinctive cuisine and Suizenji garden. But among the American community in Japan, Good Time Charlie's Bar is another popular Kumamoto attraction.

Last month, I visited the bar to hear Charlie Nagatani and his band playing American country music for an enthusiastic audience. Japanese men and women dressed in jeans, boots, and bandanas danced to his music or clapped time from their seats. I ordered a nice cold Coors beer, but Kentucky bourbon and Tennessee whiskey and soda seemed to be even more popular choices. 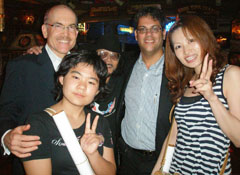 When he took a break from playing his set, Charlie came over to greet me. He explained that he fell in love with country music at his 20th birthday party when a friend invited a country music band to play at his party. Charlie has been playing country music ever since, traveling frequently to the Grand Ole Opry in Nashville, Tennessee to perform before American audiences. Each October, he also organizes the Country Gold Country Music festival near Mount Aso.

Charlie invited me up to the stage, where I presented him a commemorative coin from our Consulate in Fukuoka. I told him that exchanging coins is a tradition in the U.S. military. One presents a new a friend with a coin from one's unit as a gesture of friendship and respect.

The walls of Charlie's bar are covered with hundreds of mementos from his travels to the United States. If you visit Kumamoto, I hope you will visit Good Time Charlie's bar to listen to him play. Perhaps you will even find his new coin on display.