June 2 - Today's guest blog is by Ed Burleson from our Consular Section. We sent him to Sendai in Miyagi Prefecture a few days after the Great East Japan Earthquake to locate and help American citizens living there. 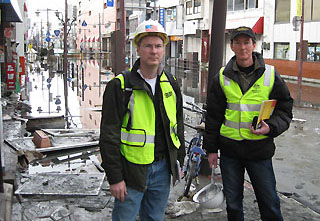 Here I am (left) in downtown Ishinomaki with Phil Anderson from the Australian Embassy.

After the March 11 earthquake and disasters, I went to Miyagi Prefecture with another officer, two Japanese consular staff and two Embassy drivers. We literally went from one end of the prefecture to the other to locate missing Americans and make sure they were alright.

We often felt like detectives, as we needed to visit multiple locations to track down and find each missing American, since our information was sometimes incomplete. We visited evacuation shelters, hospitals, morgues, city halls, police stations, and anywhere else our leads took us. All told, we found or accounted for 62 individuals during our seven days in Miyagi.

Andy Utschig and I confirm the welfare of two Americans in rural Miyagi prefecture, while also gathering information on other Americans in the area.

During our search, we encountered some amazing people. At a junior high school in Ishinomaki, I met an American woman teaching English on the JET Program who had become a leader at her school during this crisis. Although she had the opportunity herself to evacuate, she stayed in Ishinomaki to help her adopted community. 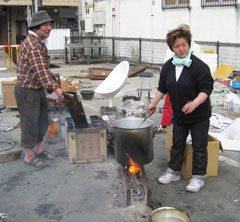 Residents in Ishinomaki prepare hot meals for any neighbors who are hungry.

At the 22 administrative offices we visited, government officials went out of their way to provide us with names, addresses, and even maps showing where Americans were working or living. We greatly appreciated this assistance, especially given the stress on these civil servants from the overwhelming circumstances that engulfed them. 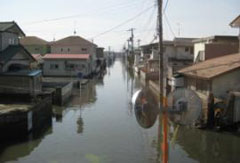 A flooded neighborhood in Ishinomaki four days after the earthquake and tsunami. 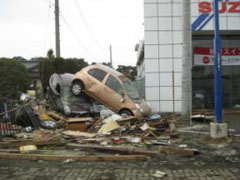 We saw extensive damage in the disaster zone.

In a vacant parking lot next to the still flooded Ishinomaki City Hall building, we met a group of residents who had pooled their perishable food supply and were cooking with scrap wood from damaged buildings. They told us they were just helping their neighbors in time of need, figuring that a hot meal would be welcome. They offered food to us, but we could not accept any of their precious resources.

Even though more than two months have now passed since the earthquake and tsunami hit, I find that I often think back to the people we met in Miyagi Prefecture. 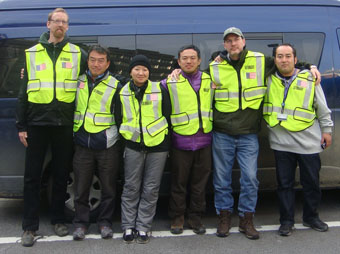 The spirit of resilience, cooperation, and community permeated every location we visited.

I am touched with a feeling of pride and joy at our human connective caring where a few called individuals hold us up and actively say "We Can" if we try hard enough. Thank you so much, and thank you for letting us know what you are doing to help in Japan.

Thank you very much for your heartful visit to damaged areas.

Excellent and very much inspirational report from Ishinomaki. It's great to see Embassy personnel on the ground and making important contributions. I volunteered up there in Tohoku over Golden Week with a group from ICU and was sad to see the true scale of destruction. Nonetheless, the resilience of survivors is quite inspirational in the face of such tough circumstances.

Thanks again for your great blog!

I enjoyed reading your blog, Ed. Helping other Americans overseas in times of stress or disaster is one of the most satisfying things a consular officer gets to do.

Just wondering how many Americans were registered in the ACS data base or STEP in the area where you were working?

Thank you for your comment. I agree that helping others in a time of crisis is very rewarding work. This was certainly the case in March. Per your question, we estimated that there were over 1,000 U.S. citizens in the three heaviest hit prefectures (Miyagi, Iwate, and Fukushima). Of course, enrollment in the STEP program dramatically increased once the disasters struck.